Businesses turned to freelancers most often for help with technology, digital marketing and design tasks over the past year, according to new research.

A survey of 15,000 freelancers by freelance jobs marketplace PeoplePerHour found freelancers across these three areas had been most in demand during the past 12 months. More specifically, web development, content writing and graphic design topped the list of tasks outsourced during the pandemic.

Xenios Thrasyvoulou, Founder and CEO of PeoplePerHour, said: “During the past 12 months, every aspect of normal life has changed, from how you do your shopping, to how you run your business.

“Many businesses have had to adapt and move online requiring specific skills and competencies at a given point in time, which makes using freelancers particularly attractive for many companies.”

In particular, the research found that many businesses had set up websites or ecommerce marketplaces for the first time over the past year, leading to web development, app development and coding skills becoming even more in demand than they were previously.

Companies had also increased their use of digital channels over the past year, seeking help from freelancers to write content and manage social media campaigns.

Graphic designers were also in high demand as businesses looked to boost their online presence with new logos, online brochures, posters and other creative material.

And due to the shift to home working and the downturn in some industries, some businesses had either cut back on staff or placed them on furlough, so turned to freelancers for business support such as sales or virtual assistance.

Thrasyvoulou said the strong demand for freelancers was especially welcome as many had been badly affected by the pandemic. “Small businesses and the self-employed have been some of the hardest-hit sectors, with less government support than those who are in full-time employment.” 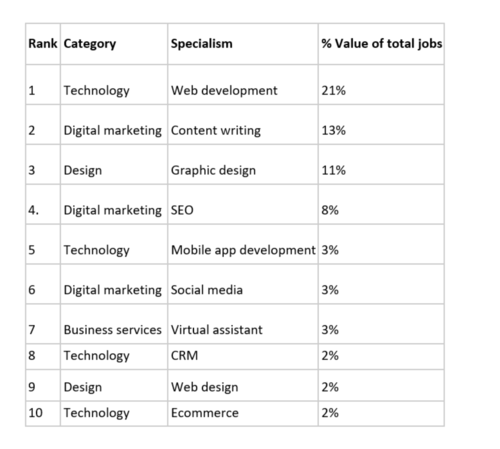